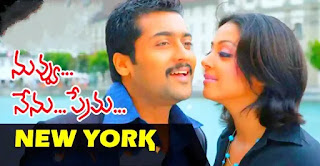 Kodumai Kodumaiyo
Such a torture

Naan Inge Neeyum Ange
I am here and you are away

Vaan Inge Neelam Ange
The sky is here, blue is away

Vaa Anbe Neeyum Vanthal Senkanal Koode Panikatti Pole Marume
Come darling, once you are with me even fireballs become snow


Gowtham (Surya) and Vaishnavi (Jyothika) get married. Vaishnavi is a village belle and there is not pre-marriage love story between the two. Six years later these two are with their daughter Ishwarya (Baby Shreya) in Mumbai. The village belle ? Vaishnavi ? is shown as modern lady and working in Mumbai. Surprising how that small village girl could transform into such modern woman, albeit without evening knowing a single word of Hindi? only director Krishna would be able to answer the question.

Gowtham and Vaishnavi along with their daughter Ishwarya are an ideal family? typical modern family who share all the joys and sorrows amongst themselves. The wife sits with her husband in weekly drinking sessions (sic)! Into their family enters a storm in the form of a dairy written by Gowtham. The dairy brings out the flashback -

Gowtham during his college days was in love with Ishwarya (Bhoomika). Her father (Costumes Krishna) is a local MP. Gowtham and Ishwarya love each other and finally decide to get married at a registred marriage office. While he ties the thali, her father comes and bashes up our hero and takes away his daughter. In that dairy Gowtham writes that he would like to have spent at least one day with Ishwarya as husband and wife. This line affects our Vaishnavi and she goes in search of Ishwarya, brings her to Mumbai and asks her husband to spend one day with her? Now the story is all about what happens after they spend the day. Will Vaishnavi accept her husband back? Will Ishwarya after one day go back? Does Gowtham want Vaishnavi or Ishwarya or both of them? At the end it is the same story of legal husband and wife living together.